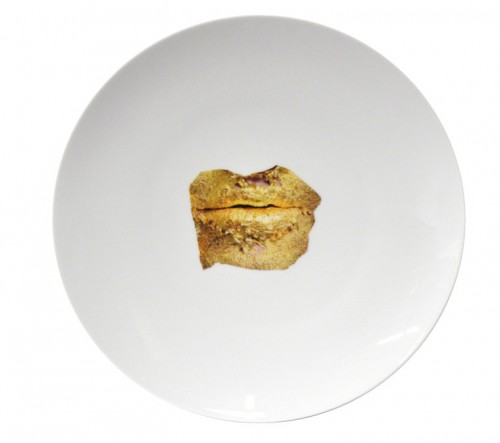 Now you can put your pasta on an image of Marina Abramović‘s gold-leaf covered lips. The MoMA Design Store and Bernardaud present Abramović Method: Misfits for the Table, a set of mismatched porcelain plates featuring the above lips, as well as star, sun and moon motifs, and Marina’s family crest from Montenegro. Each set is comprised of four pieces at a $550 retail price, on offer for the first time with an edition of 2,000. At the by-invitation reception for the launch of the plate sets on February 3rd at the MoMA, there will be a special screening of Abramović Method: Misfits for the Table – A film by Marina Abramović. The film will show a couple in three phases of their relationship eating different meals together, because as Abramović says, “Life is not perfect, so why should your tableware match?…I believe that a meal should always be a ritual, no matter the circumstances.”

You can have a misfit dinner for two, or one set can be used for a lonely dinner for one. “We are all so afraid of loneliness,” she says, “but I think that being just with yourself means being with your mind and your body in the present moment. It was important to me to create a set of plates that would allow for this ‘lonely dinner for one,’ a meal that I actually think can be quite happy.” 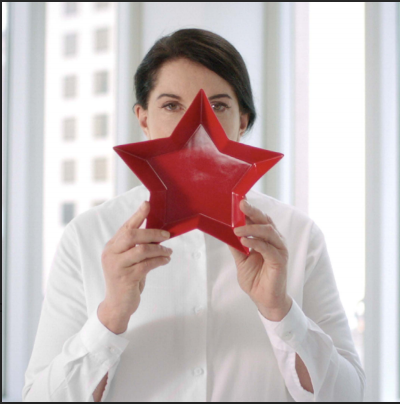 The imagery of the wolf eating the lamb, the planet Mars, and a right-facing crow that feature on the dishes are all from “noble warrior crest” of Marina’s ancestors. The golden lips are, in fact, a detail from one of Marina’s photographs where she covered her lips in honey and gold-leaf. The red star dish has significance as a communist symbol that Marina grew up with in ex-Yugoslavia, and the other cosmic imagery come from her fascination with black holes, galaxies, and how they influence our daily lives. When you have the universe, a warrior crest, and lips staring back at you from your dishes, you know it’s not going to be an ordinary meal; it will be a meal fit for the Abramović Method.