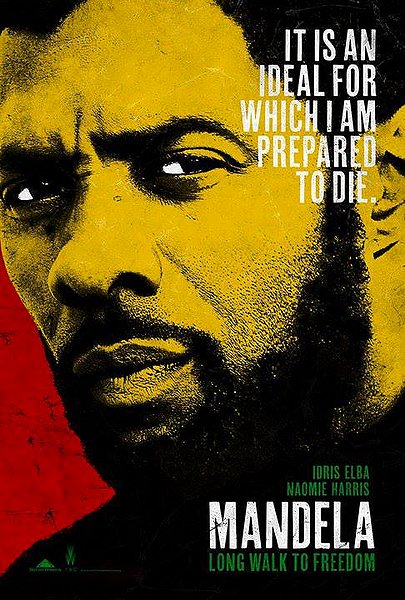 Mandela: Long Walk to Freedom successfully manages an impressive balancing act. There’s an inherent tension running throughout the biopic genre; they typically choose between portraying their central figures as unblemished messiahs and a more controversy-driven “warts and all” approach. At its best, Mandela proves this to be a false dichotomy. It’s perfectly possible to celebrate the lives of legends without glossing over their darker moments or thoughts.

Mandela: Long Walk to Freedom is a biopic of legendary South African civil rights leader and President Nelson Mandela (Idris Elba). Hopefully there’s enough left of the education system that we’re spared the need for a plot summary. Mandela takes a snapshot of Mandela’s life from childhood to the beginning his Presidency, risking a lack of focus. This gamble pays off with a full, inspiring sketch of Nelson Mandela with minimal missteps and just a hint of runtime bloat.

Mandela is conscious of the legacies of biopics before it, and constructs a dialogue with them. Between Patton and Ghandhi, the genre’s tools were codified by films that glorified paragons of violence and nonviolence. Mandela plays best when it questions the place and value of both perspectives; we see both passive and violent resistance at their best and most counter-productive. Mandela characterizes its titular character by his ability to navigate both worlds without losing his way. The film ends with the typical stance that peace is the only way forward, but underlines it with the surprisingly firm resolve that a bit of violence is sometimes necessary to get there.

The film pulls an impressive bait-and-switch with its core relationship. Mandela’s second wife Winnie (Naomie Harris) is introduced as a relatively thin character, but evolves into one of the film’s more engaging figures. Mandela takes advantage of our assumption that Winnie will simply be glossed over as Mandela’s perfect, long-suffering bride. But then hate comes into the picture. Through her abuses by the hand of South Africa’s government, Winnie Mandela becomes an avatar of the justified yet poisonous hatred apartheid bred in its victims. Mandela admits that he isn’t untouched by the hatred, but casts replacing white supremacy with black supremacy as another prison. The focus on the rage of the oppressed lends Mandela nuance.

The casting in Mandela is on point. Idris Elba’s natural charisma lends plausibility to moments that might have come off as heavy-handed. Naomie Harris’ hairpin turn from a stirring speech against oppression to a furious interdiction against traitors lends the clash between Winnie and Nelson Mandela similar weight. I can’t speak for or against the authenticity of the leads’ accents, but they certainly avoid anything cartoonishly abrasive.

Considering its running time, Mandela does a good job of maintaining audience interest. There are only two moments when it drags on. The first phase of Mandela’s prison tenure moves at a crawl and plays through points that could be established in a fraction of the time. Understanding the length of his imprisonment is important, but making the audience feel it is a double-edged sword. You also feel Mandela’s length during a few unfortunate montages of inserted news footage during the third act of the film. They aren’t necessarily badly done, but the American pop music and shift in style drag the viewer out of an otherwise immersive experience.

Apartheid’s survival until the turn of the century is a historical detail many would prefer faded quietly from memory. Mandela drags the issue back into the public consciousness through the eyes of one of the key figures in its downfall. The film mostly does so without falling into the traps of excess sentimentality, and is better for it.

Mandela opens in US cinemas November 28.