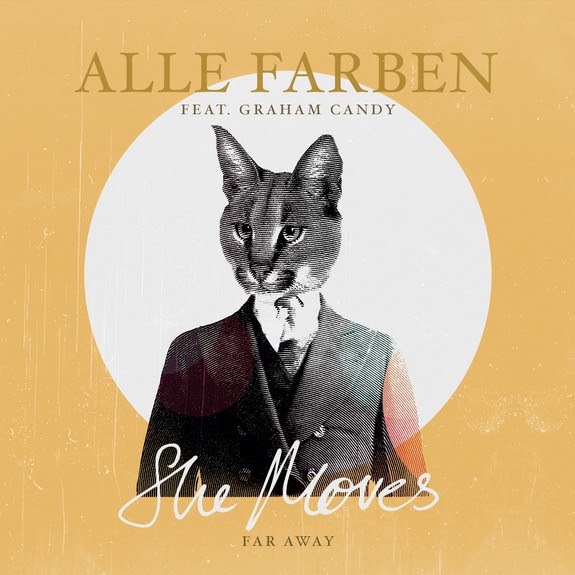 Pioneering Berlin DJ and producer Alle Farben’s brand new single ‘She Moves (Far Away)’ feat. Graham Candy is out now through Guesstimate/Sony Music International. The first track to be released from his forthcoming artist album ‘Synesthesia’, it’s a dreamy blend of pop-infused melodic house music. This track comes out ahead of the rest of the release package, which boasts remixes from flavour of the past year Bakermat, South Africa’s finest Goldfish, plus an Alle Farben Club Mix and further B-Side ‘Down’. The full EP is available to pre-order now via iTunes before it drops on Monday June 23rd .
Having been raised in and surrounded by the sonic wonders of Germany’s capital, Frans Zimmer – AKA Alle Farben – immersed himself from an early age in everything it had to offer. However, finding something lacking for his particular upbeat tastes he sought to develop a new sound, taking influence from the masterful electronic music in the clubs and injecting more melody over the 4/4 and ever-present booming bass.
He’s cultivated and mastered his sound over a number of years and in the process built up an extraordinary online following, with his color-coordinated mixtapes (Alle Farben meaning ‘all colors’ in German), own productions and spectacular remixes. Now as the sound he blazed the trail for begins to sweep across the globe and envelops music lovers with its mixture of dulcet tones and up-tempo grooves – with the likes of Bakermat, Klangkarussell, Robin Schulz, Klingkande and more all achieving great and deserved success – Alle Farben is ready to put the wheels in motion for his full length LP, starting with ‘She Moves’!
Further remixes and singles will be on their way in the coming weeks and months as well as a host of tour dates across the globe. Check out ‘She Moves’ below, or download on iTunes.