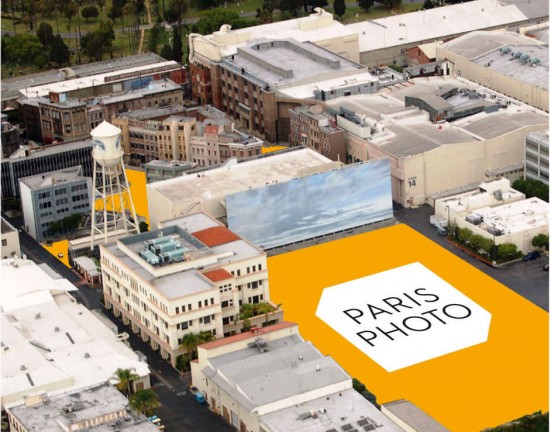 Paris Photo, Los Angeles, dedicated to the exhibition of historical and contemporary artworks, will return to the Paramount Pictures Studios for its third US edition from May 1-3, 2015. Collectors and enthusiasts of photography will once again have the opportunity to experience and discover galleries from all around the world within the context of the iconic movie sets located in the heart of Hollywood.Besides the standard exhibits of Studios, which will host international galleries showing a survey of historical artworks alongside the work of major contemporary artists, and New York Street Backlot, a permanent film set recreating the streets of New York, dedicated to solo shows and exhibitions by young galleries and specialized publication house projects, Paris Photo Los Angeles also presents special 2015 programming:

Sound & Vision: The Conversations, the annual program of meetings and debates, will be held in the Sherry Lansing Theatre orchestrated by Douglas Fogle and Hanneke Skerath, both independent curators.The full list of participants will be released in mid-February.

CALIFORNIA UNEDITED! will present an exceptional collection of photographs taken in California at the end of the 19th century by Richard J. Arnold. These previously unseen photographs printed from recently restored glass plate negatives portray the Central Coast’s local communities by a single photographer. Co-curated by Julien Frydman and Anthony Lepore.

INTRODUCING! Young California Photographer Award, in partnership with J.P. Morgan, Paris Photo Los Angeles will honor the work of one student selected from an art school in California. The exhibition will provide the opportunity to discover the work of young photographers and to identify the talents of tomorrow. Call for entries and jury members will be announced by the end of February.

The Conversations will offer visitors a wide array of intellectual perspectives on the use of images from some of the leading international artists and curators working today. With two conversations each day over the three days of Paris Photo Los Angeles, the series will bring together a pair of artists for an open dialogue of their artistic practices as well as more philosophical discussion about the status of the image in contemporary society. Through an additional emphasis on the moving image, the conversations will open up the discussion to the larger world of image making that runs parallel to traditional photographic practice. Each conversation will be preceded with an introduction by a leading curator or critic from the fields of photography, contemporary art, and cinema.

Following the acclaimed exhibition UNEDITED! The LAPD Photo Archives in 2014, a new edition of UNEDITED! will offer visitors an opportunity to discover photography archives never shown to a wide public. CALIFORNIA UNEDITED! will present, for the first time in Los Angeles, the R.J. Arnold Archives, an exceptional collection of photographs taken in California at the end of the 19th century by Richard J. Arnold. These previously unseen photographs printed from recently restored glass plate negatives portray the Central Coast’s local communities by a single photographer. The 2015 edition of UNEDITED! is co-curated by Julien Frydman and Anthony Lepore.