To do a Playboy cover or not to do a Playboy cover? That is the question that many beautiful, powerful women in the entertainment industry have to ask themselves at one point or another. Azealia Banks is the most recent star to have said yes to baring it all, in the magazine’s grand tradition, and is gracing the front pages for the April 2015 Music issue of the magazine, which hit stands March 20th.

Playboy is a controversial topic in feminist circles, with some arguing that no woman should be objectified like that, while others say that if a woman wants to take her clothes off and step onto the front pages of a public magazine, then all power to her. No shame, they say. Azealia herself is one who finds power in expressing her female sexuality. She calls her fan-base the “cunt army,” and wants to reclaim the word “cunt” from meaning something derogatory to a word expressing female power.

In her 1963 expose on Manhattan’s Playboy Club, “A Bunny’s Tale,” Gloria Steinem wrote that “All Women are bunnies, but it doesn’t have to be that way.” All women, whether wearing a bunny suit or a business suit, can be objectified. Steinem went undercover as a Playboy bunny, and found that the life wasn’t all that glamorous. That’s the problem with Playboy – they portray something that isn’t real, and it distorts expectations. But that happens in Vogue editorials just the same, so is it really a feminist issue, or is it something more as well?

There have been several celebrities who have taken their fair share of Playboy covers, and usually, the move was beneficial to their careers instead of receiving bad press. Mariah Carey has previously been featured on the magazine’s “Sex and Music” issue. After her sex tape scandal, Kim Kardashian posed for Playboy during season one of E!’s “Keeping Up With the Kardashians,” and seeing how well that worked for publicity, she has since gone on to open up the magazine market to more nude photos of herself, like the one where she “broke the internet” on the cover of Paper Mag.

Women’s bodies are not the problem, but it becomes a problem when women become just their bodies. Sure, you can read the interview, too, but not many people are going to be focusing on Azealia Banks’ words when her naked body is on the next page. Supermodel Kate Moss has been a perenial favorite of Playboy, gracing their 60th anniversary issue cover. The starlet relaunched her career in 2012 with a cover shoot for Playboy, where she told the mag, “Knowing yourself and your body is so important, because it gives you confidence, and in life, women need confidence. It’s a very male-dominated world to begin with, so knowing yourself and being comfortable with your body is an important thing for me as a woman.” This is the same woman who said “nothing tastes as good as skinny feels,” igniting body-image debates across the industry. 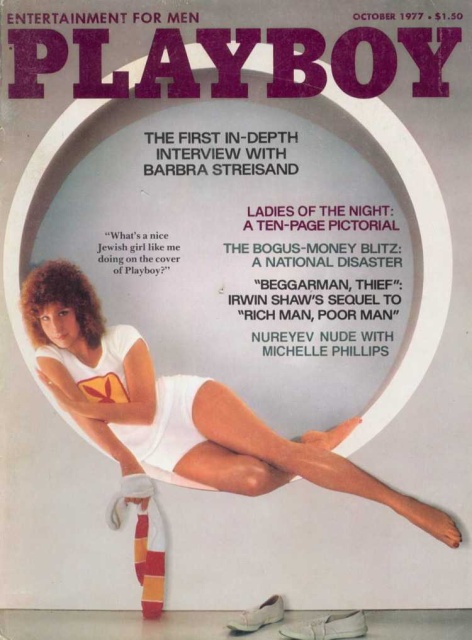 There is a lot of back and forth that goes on with body image and men’s magazines, and it’s sometimes hard to decide what is empowering and what is not. After refusing to appear nude in films or magazine throughout the 70s and 80s, Farrah Fawcett apparently changed her mind and shocked everyone with a spread in the December 1995 issue of Playboy.

With models like Daisy Lowe, who was in the September 2011 issue of Playboy, Cindy Crawford, and Elle MacPherson, their Playboy covers gave them that elusive edge encapsulated in the two words, “sex appeal.” What the public needs to realize is that beauty and power are not mutually exclusive, and Playboy is actually a media outlet which gives their models some power: they don’t have to shoot fully nude if they don’t want to. Heidi Montag declined showing full frontal nudity for her spread for the magazine.

Perhaps the best example of a Playboy cover model is the inaugural Marilyn Monroe. She faced heavy criticism for wearing a dress with a neckline cut almost to her navel at the Miss America Parade. An image from the event was later used on the cover of the first edition of Playboy in December 1953 with a nude photo of the screen siren inside the magazine. Criticizing women who wear what they want to wear is more of a problem than women wearing scandalous clothing, as it creates a set of arbitrary rules for women to align themselves with instead of saying to them, “be who you want to be!”