“When you’re exploring a character, you’re really exploring yourself,” Spacek insisted during a 2011 Vanity Fair interview. She has chosen her roles accordingly. The daughter of a Texas sign painter in Badlands? That’s Spacek. The social outcast who somehow wound up being prom queen? That’s Spacek. The daughter of a Kentucky coal miner who ran away and became a sensation? That, again, is Sissy Spacek. In the early 70s, Spacek appeared as if out of a Wyeth painting – desperate and cloying, with windswept hair and topaz eyes. There was a weight beneath those cheekbones, a sense, perhaps, that Spacek cried herself to sleep at night. She had dirt beneath her fingernails. She had grit between her teeth. She put Vaseline in her hair prior to auditioning for Carrie. She started off her memoir with the sentence: “Sometimes there’s no better entertainment than a town dump.” Spacek straddled the divide between absurdity and flair, winning praise for her unique attempts at style. It is that moment when Holly Sargis is dancing to “Love Is Strange” with Kit Carruthers; that moment when Carrie White learns to accept a genuine compliment; that moment when Ruth Fowler looks over her shoulder, realizing the man who murdered her son is standing just a few feet behind her. Sissy Spacek causes moviegoers to believe because she does not overplay her hand. Every gesture is nimble; every nuance, complete. 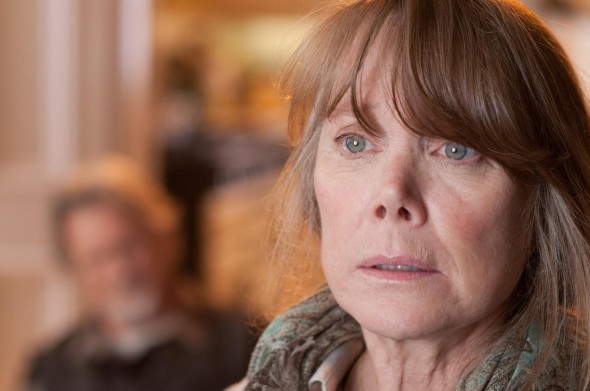 Spacek will turn 65 on Christmas, a growing history of more than 60 credits to her name. In terms of legacy, it is the concentration of each performance that has rendered Spacek one of cinema’s immortals. She scored her first coup with Badlands, one half of a duo so memorable, the lead characters in both of Quentin Tarantino’s first two screenplays (True Romance and Natural Born Killers) were patterned after Kit and Holly. She played a high school senior at 25; a 14-year old at 29. She was nominated for her first Academy Award at 26; she won for Coal Miner’s Daughter at 30. Spacek made such an impact throughout the 70s that 1980’s Urban Cowboy featured a poor Texas tomgirl by the name of Sissy – a role originally written for Spacek that transformed Debra Winger into a star.

Spacek’s choices speak to integrity: Mae Garvey in The River as opposed to Emma Horton in Terms of Endearment; Miriam Thompson in The Long Walk Home as opposed to Thelma in Thelma & Louise. The idea: to err upon the axis of substance, minimizing any risk of personal embarrassment or failure. The superlatives: six Best Actress nominations, roles in five films that were nominated for Best Picture, five New York Critics Circle Awards, four BAFTA nominations and one Grammy for Coal Miner’s Daughter.

During interviews, Spacek still comes off in that same-old cosmic, hippy way that Joni Mitchell often does. At 64, Spacek’s freckles have given way to crow’s feet. She’s an aging belle whose appeal remains androgynous; her allure, purely American. Spacek lives on 30 acres of farmland in rural Gordonsville, Virginia, inhabiting a world storied by grain elevators, clapboard houses, sweeping pastures, and wooden porch swings.

Having reached the age of retirement, Spacek recently completed work on the first season of a Netflix series entitled Bloodline. She is currently in preproduction on Other People – a big-screen drama about a Saturday Night Live writer who returns home to spend time with his terminally-ill mother. By all appearances, Sissy Spacek has remained relevant by refusing to rage against the dying of the light. There are no scandals, no embarrassing levels of surgery, no transparent attempts at vanity. And yet, Spacek continues to represent the very epitome of class. She is a mother and a wife and a daughter from Quitman, Texas, who took up acting in between.