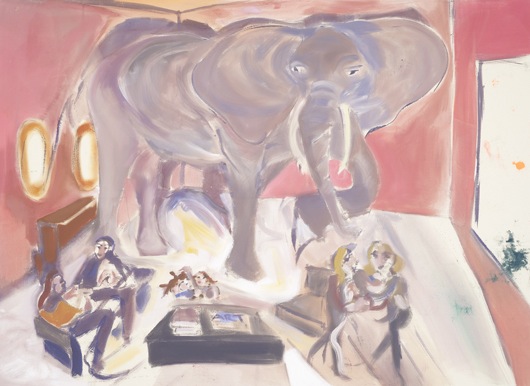 Von Hellermann’s large-scale, narrative paintings have been described as a ‘meltdown of images from books, films, art history, the media and her own life’. Using rapid, broad brushstrokes to apply pure pigment to her canvases, her works have a hazy, dream-like quality.

Elephant in the Room features new large-scale canvases and two three-dimensional painted works, including a 7.5-metre high ‘pyre’ inspired by the witch trials that took place in Essex during the English Civil War.

A new publication on von Hellermann’s work will be launched during the exhibition. The book includes full-colour illustrations, a newly commissioned essay, and an extended interview between the artist and Oscar Humphries, editor of Apollo magazine.

Sophie von Hellermann (b. Munich, 1975) studied painting at the Kunstakademie, Dusseldorf and the Royal College of Art, London. She has held solo exhibitions at Museum Dhondt-Daenens (MMD), Deurle (2010); Le Consortium, Dijon (with Josh Smith, 2009); Neuer Aachener Kunstverein, Aachen (2006); Chisenhale Gallery, London (2006); and Kunstverein Konstanz (2003). Her work has been included in major survey exhibitions such as Watercolour at Tate Britain (2011). She lives and works in London and Margate.