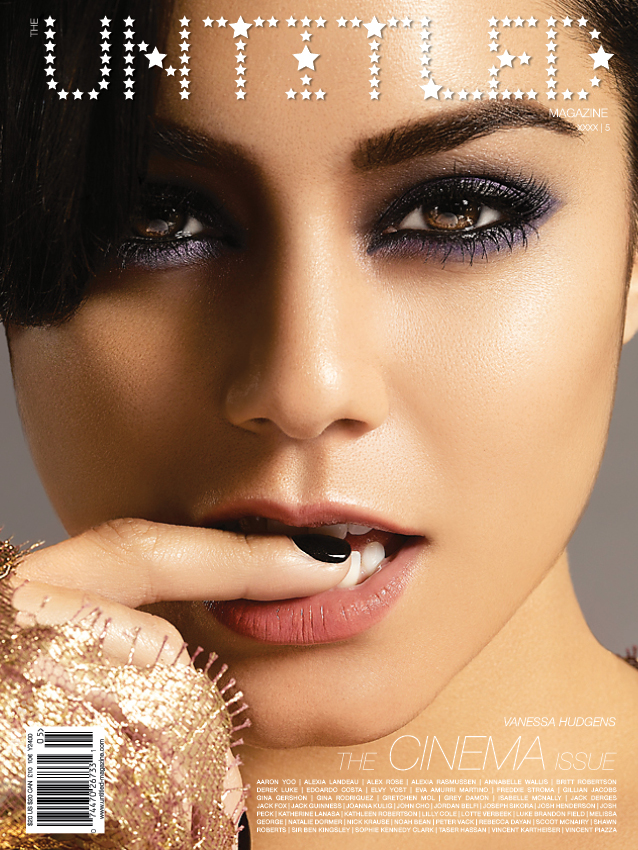 The Untitled Magazine presents the global launch of the “Cinema” issue 5 – with a cover story on actress Vanessa Hudgens, photographed and interviewed by The Untitled’s Editor in Chief, Indira Cesarine.

by Indira Cesarine for The Untitled Magazine Cinema Issue

When you hear the name Vanessa Hudgens, what comes to mind? All American sweetheart, the actress “Gabiella Montez” from Disney’s High School Musical, the exgirlfriend of Zac Effron, singer, cover girl, yoga enthusiast, winner of countless teen choice awards…. Your perception of Vanessa is about to change with back-to-back challenging roles in some extremely dynamic films. The Untitled Magazine’s Editor in Chief, Indira Cesarine, met up with the actress to talk about her daring new roles, and what it took to transition from a Disney darling to a serious leading lady with a very certain future.

Born in 1988 in Salinas, California, the Irish, Native American and Filipino beauty is the daughter of a fire fighter. Acting from the age of three, she has been honing her craft her entire life – singing, dancing and acting along the way from one success to the next. “I started when I was really, really young… I did my first play when I was three in my pre- school production of the Nativity story. I played Mother Mary holding a baby Jesus and he’s sitting away in the manger. Ever since then my parents allowed me the freedom to take classes. I started taking dance lessons, and singing lessons, and piano lessons, and getting into community theater and I always loved it. I kept on doing plays and one thing just led to the other.”

Despite critically acclaimed performances in movies like Bandslam, the 24 year old actress is most well known from her Disney High School Musical series. She has found transitioning from her image as “Gabriela Montez” to be one of the most challenging achievements of her career thus far. “High School Musical was incredible and it was so fun and it gave me so many fans which I’m very, very thankful for, but it also closed people’s minds up as to which characters I could portray. They only saw me as Gabriella Montez and I love that character but there’s so much more to me than just that. So for a while I was kind of struggling and fighting for these roles that I just desperately wanted. It was hard and it was a struggle, but then again life is always a struggle. Having a career will always be a struggle. You’ll always have to fight for what you want. Definitely crossing over and being able to tackle these grittier parts was a challenge, but I feel like I’ve done it! It’s a whole new chapter!”

She has recently broadened her horizons with some seriously gritty roles. In her new movies, including Gimme Shelter, Spring Breakers and The Frozen Ground, she plays against character as a prostitute, a drug addict and a teenage pregnant runaway. In Spring Breakers, directed by controversial director Harmony Korine (Kids, Gummo, Julien Donkey- Boy), she plays opposite James Franco and Selena Gomez. The film has already created quite a buzz, and will be competing in this year’s Venice and Toronto Film Festivals, which will be a first for Vanessa. “I’ve never even been to a film festival, let alone competed in one! I’m really proud of the movie. I feel like it’s a breed of its own, it’s a movie unlike any other and it’s very fresh and fun and exciting. I feel like it’s a great take on our youth culture right now.”

Read the full interview in the Cinema issue of The Untitled Magazine, available on newsstands globally from September 2012. Stay tuned for the release of the digital edition and iPad App, featuring exclusive photo shoots and interviews with of over 30 rising and established stars of the stage and screen, as well as extras such as behind the scenes videos from the shoots. For retail availability of The Untitled Magazine visit www.untitled-magazine.com/purchase.

INTERVIEW WITH SCOOT MCNAIRY, STAR OF "KILLING THEM SOFTLY"