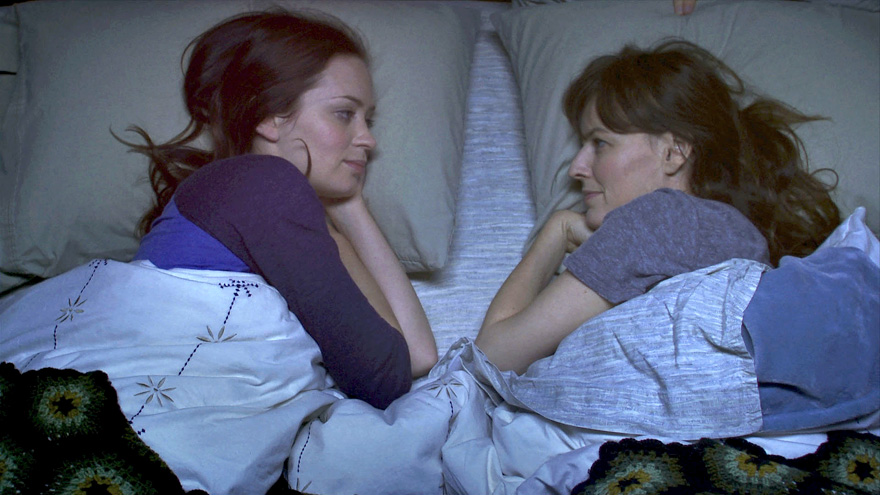 Your Sister’s Sister is the new film by director Lynn Shelton (Humpday), about inter-family squabbles, the complexity of human relationships, and living life, all done in her trademark naturalistic, humorous style.  The film centers around Jack (Mark Duplass) who a year after his brother’s death has still not emotionally recovered and is struggling to get his life back on track. Iris (Emily Blunt), his best friend and the ex-girlfriend of his late brother, whom he also happens to be in love with, suggests that Jack take some time to collect himself, and sends him to her family’s vacation home in the San Juan Islands off of Seattle. When he gets there, however, Jack stumbles upon Iris’s sister Hanna (Rosemarie Dewitt), who has taken refuge at the family cabin after a terrible breakup with her longterm girlfriend.  Both of their plans for a period of solo self-discovery ruined, the two decide to get to know one another and start taking shots.  Tequila leads to a drunken one-night stand, and the two are woken up the next morning to the sounds of Iris arriving unannounced at the cabin.  The rest of the film is a mad rush as each character tries to keep their own arsenal of secrets from the others and their lies and excuses become flimsier and flimsier. The film, in Shelton’s typical style, is a small slice of life that delves deeply into the interior emotional existences of her characters.  The film is an interesting study in family dynamics and personal relationships, however, the drama that drives the plot often seems unfounded and unbelievable. No one in this film reacts appropriately to the reality of the situation, making a bigger fuss over Jack and Hanna sleeping together, than the later drama of the denouement, which is much crazier, unacceptable, and shocking, and yet everyone happily resigns themselves to acceptance.  The film does have its moments where Shelton’s humor and pithy dialogue shine, but overall, it lacks a strong focus and logic driven sense of drama.