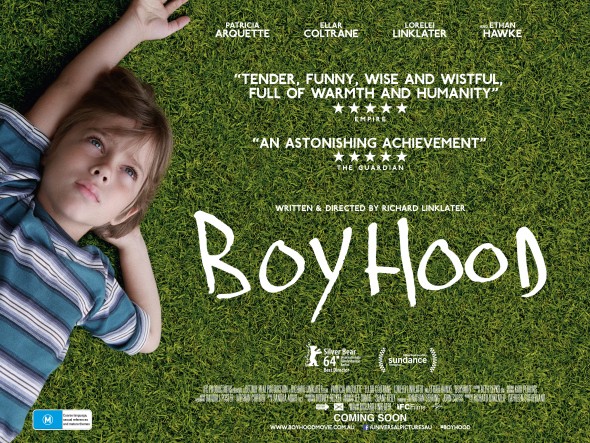 Back in 2002, the critically acclaimed filmmaker, Richard Linklater, said that he would begin shooting an untitled film in his hometown of Houston, Texas. Filmed in forty-five days over the course of eleven years, the end result is 2014’s Boyhood, a coming-of-age drama starring Ellar Coltrane, Emmy-award winner Patricia Arquette, Lorelei Linklater and Academy-award nominee Ethan Hawke.

Richard Linklater, whose previous directing credits include Dazed and Confused (1993), Waking Life (2001), School of Rock (2003), Before Sunrise (1995)” and its two sequels, Before Sunset (2004) and Before Midnight (2013),” is often noted for his loosely structured narrative style, and Boyhood is no exception.

Similar to the Before Trilogy, which tells the story of a couple’s relationship over the coarse of eighteen years in real time, “Boyhood” follows the formative years of Mason Evans, Jr. (Coltrane)

From the age of six to eighteen, we watch Mason grow and mature, and in true Linklater fashion, learn the ways of the world through stream of conscious dialogue with those around him, including his single mother (Arquette), his slacker father (Hawke) and his older sister (Linklater), with the later being played by the director’s daughter. 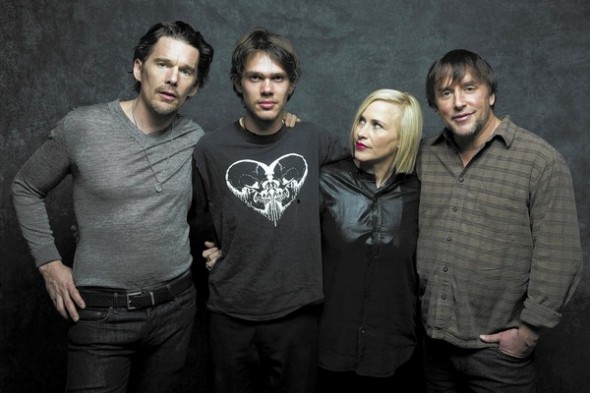 Boyhood began production without a finished script. Having only prepared each character’s basic plot points and the film’s conclusion, Linklater relied heavily on input and life experience from the key cast members. It was not uncommon for some scenes to be left incomplete until the day before shooting.

The nostalgic product placements, such as flip phones and Halo 2 on the original XBOX, the release of Harry Potter and the Half Blood Prince, newsreels of the United States’ early involvement in Iraq and the upcoming 2008 Presidential Elections also act as a time capsule for the last decade, or even a flipbook for Generation Z.

However, the upcoming Star Wars film, slated to hit theaters on December 15, 2015, proves false a conversation between Mason and his father about the impossibility of any future installments after the events of Return of the Jedi.

Richard Linklater’s Boyhood, presented by IFC Films and Universal Pictures, will be available on Blu-ray and DVD on January 9th, 2015.

DATING ONLINE: ARE WE TURNING INTO DISPOSABLE THINGS?

0
Anthony Perrotta January 9, 2015
No Comments Yet