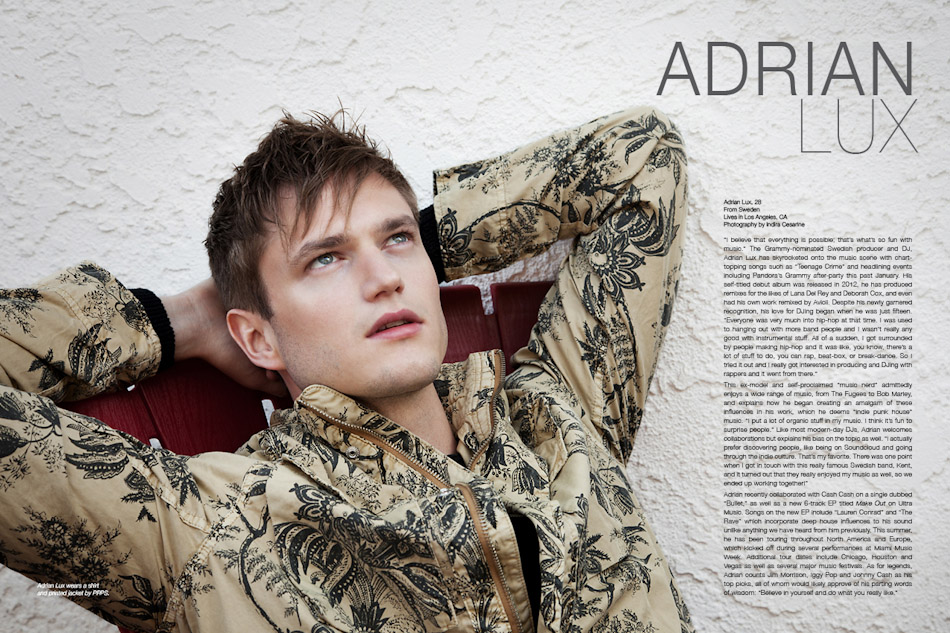 “I believe that everything is possible; that’s what’s so fun with music.” Grammy-nominated Swedish producer and DJ, Adrian Lux, has skyrocketed onto the music scene with chart-topping songs such as “Teenage Crime” and has headlined events, including Pandora’s Grammy after-party last January. His self-titled debut album was released in 2012, and he has produced remixes for the likes of Lana Del Rey and Deborah Cox. He even had his own work remixed by Avicii. His love for DJing began when he was just fifteen; “Everyone was very much into hip-hop at that time. I was used to hanging out with more band people, and I wasn’t really good with instrumental stuff. But all of a sudden, I was surrounded by people making hip-hop. There’s a lot of stuff to do;  you can rap, or beat-box, or break-dance. And I became interested in the producing, the DJing, and being behind the rappers, and it kind of went from there.”

This ex-model and self-proclaimed “music nerd” admittedly enjoys a wide range of music, from The Fugees to Bob Marley, and explains how he began creating an amalgam of these influences in his work, which he deems “indie punk house” music. “I put a lot of organic stuff in my music. I think it’s fun to surprise people.” Like most modern-day DJs, Adrian welcomes collaborations, but explains his bias on the topic: “I actually prefer discovering people, like being on SoundCloud and going through the indie culture. That’s my favorite. There was one point when I got in touch with this really famous Swedish band, Kent, and it turned out that they really enjoyed my music as well, so we ended up working together!”

In January of last year, Adrian collaborated with Cash Cash on a single dubbed “Bullet,” and in June, he released a new six-track EP titled Make Out on Ultra Music to positive critical response. Songs on the new EP include “Lauren Conrad” and “The Rain,” which incorporates deep house influences unlike what we have heard from him before. This past summer, he toured throughout North America and Europe, and kicked off during several performances at Miami Music Week. Additional tour dates included Chicago, Houston, and Vegas as well as several major music festivals. As for legends, Adrian counts Jim Morrison, Iggy Pop and Johnny Cash as his top picks, all of whom would likely approve of his parting words of wisdom: “Believe in yourself and do what you really like.”

Adrian will tour select cities in the US throughout February. Check out our Q&A with the DJ below for The Untitled Magazine’s  “Legendary” Issue 7!

Indira Cesarine: How did you first get started with DJing and producing music?

Adrian Lux: There was a period in Sweden when everyone was changing schools at age fifteen. So suddenly, I started getting new classes and new classmates, and everyone was very much into hip-hop at that time. I was used to hanging out with more band people, and I wasn’t really good with instrumental stuff. But all of a sudden, I was surrounded by people making hip-hop. There’s a lot of stuff to do;  you can rap, or beat-box, or break-dance. And I became interested in the producing, the DJing, and being behind the rappers, and it kind of went from there.

IC: You were focusing a lot on your work in Europe initially?

AL: Yeah, I was sixteen though, and there was plenty of time to party.

IC: Do you remember the first music that really made an impact on you? What were you inspired by?

AL: I’ve always been inspired by The Fugees. I also like Bob Marley, and stuff like that. I was really interested in music when I was younger. I’m a huge techno fan too; I’ve done techno for a lot of years. I’m kind of like a music nerd, I guess.

IC: When you started DJing, what sort of music was your favorite to work with?

AL: In the beginning, it was just hip-hop. Then I got more interested in English hip-hop, which was more electronic. And from that, I got interested in the electronic side; more rave music, techno, and house.

IC: Do you like to mix up the genres when you perform, or do you like to keep it more straightforward? What is your belief on genre-mashing?

AL: I believe everything is possible, that’s what’s so fun with music! You can take anything and put it into a different context. I do think that it’s a trend to get influences from other places. For example, I put a lot of organic stuff in my music. It’s fun to surprise people.

IC: You’ve done a ton of remixes, for Lana Del Rey and a lot of different artists. When you do those remixes, are you working directly with them, or are you just doing your own spin on the song?

AL: Usually the contact me and give me their song to play around with.

IC: How involved with the remix are they? Do they give you creative freedom, or is there a certain amount of back and forth?

AL: There’s a back and forth. Sometimes the artist gets super involved in it. Sometimes it’s mostly label people. It’s fun when the artist is involved.

IC: Which remixes have you done that you look back and think, “Oh I love that one?”

AL: I did one for this Australian band called Pnau. It’s one of the guys from Empire of the Sun. I made a remix of a song called “Solid Ground” for them, which I really like.

IC: How many albums have you released so far?

AL: It’s only that album so far. But I’m putting singles out all the time.

IC: How different is the creative process of putting out your own album versus your previous work?

AL: You learn a lot about yourself making an album. I was only used to putting out singles, but you want to make it sound like an album, not just the same song over again. You have to go deep in, to make a song real. It was a fun project, but extremely time-consuming. I think it is something that has made me a better artist. But, it’s something that I did mostly for myself. It’s fun to have your album, you know, to hold it. It’s like; ‘I did this.’ It’s a mega-feeling.

IC: You collaborated with a ton of different artists to do the album. Are there any that you feel were the most interesting for you to work with?

AL: I actually prefer discovering people– being on SoundCloud, looking up new artists, going through indie culture, finding bands—that’s my favorite. One point on the album, I got in touch with a really famous Swedish band, they were the biggest band there was. They had a huge impact on everyone growing up there. So, I got in touch with the band, which was a really a big deal for me. They’re called Kent, K-E-N-T. And it turned out that they really enjoyed my music as well, so they had fun on the album at the end of the day. That was a big thing. They worked with my friends, and they all knew each other. It was a big deal to get that recognition. I mean, they were huge, but then we worked on the same level.

IC: Looking back at the work that you produced, what do you feel is a track that stands out to you as one that really represents your work?

AL: There is one called ‘Teenage Crime.’ It’s my biggest song up to this day, no question. In that song, everything kind of pounds out. It’s me reliving a lot of things. I guess that would be the song to represent me. But I’m working on new stuff now. When I was working on the first album, I didn’t really know what I was doing. It turned out great, so I’m happy about that, but now I feel I’ve learned a lot. My new stuff is nearly done, and I feel strongly about it, so I’m excited.

IC: Which do you prefer: DJ-ing or producing?

AL: You can’t have one without the other. When you’re in the studio, you’ve got to have that mission, you’ve got to play hard, and then you can’t wait to be out on stage. And when you’re home, you just want to go back to the studio, and especially with the traveling—I need them both. They’re different.

IC: And what about between performing live versus being in the studio?

IC: Are there other contemporary DJs whose work you really admire and think, ‘He or she’s doing really amazing stuff?’

IC: How would you describe your personal aesthetic—your sound and what you’re into?

IC: Do you have a personal motto or words of wisdom that you like to live by?

AL: The most important stuff needs to be inspired, so to try new things is important. I guess, ‘Believe in yourself, and do what you really like.’

IC: This is our Legendary issue. What do you think when you hear the word, ‘Legendary?’

AL: I feel that it’s, well, a legend. Someone who wants to accomplish something great. I guess it is a lifetime-achievement kind of thing.

IC: Can you name a couple of legendary artists that you think are really inspirational?

IC: What do we have to look out for from you this year?

AL: There’s a new EP coming out on Electro. It’s called Make Out. It features four new songs. I made one song, which is the next single. It’s a big song, nothing really for the masses, because it’s very held back, but I tried to create an intimate feeling. There’s a track off of it called ‘The Rain,’ and there’s another track called ‘Lauren Conrad.’ It’s a special title, and it was kind of a funny story: someone showed me an article where she said she was working out to my music. So I was in the studio having fun, and I was like, ‘Ok, I’m gonna make a work-out song, just a work-out beat, and I was like, what should I call it’ So first, I just called it ‘Lauren Conrad.’ Then that name stuck to the song through the whole process. It’s kind of a cinematic song, and also kind of repetitive. And then there’s a track with a new band called Last Lynx. It’s a new Swedish band and they’re really amazing. I’m really happy about that EP. It’s going to be out in April [of 2014].

For more on Adrian Lux, make sure to head on over to The Untitled Magazine shop to pick up a copy of the “Legendary” Issue 7 now!
Photography by Indira Cesarine
Fashion Editor Indira Cesarine
Grooming by Roberto Morelli

Check out our behind the scenes video from our photo shoot with Adrian Lux below! 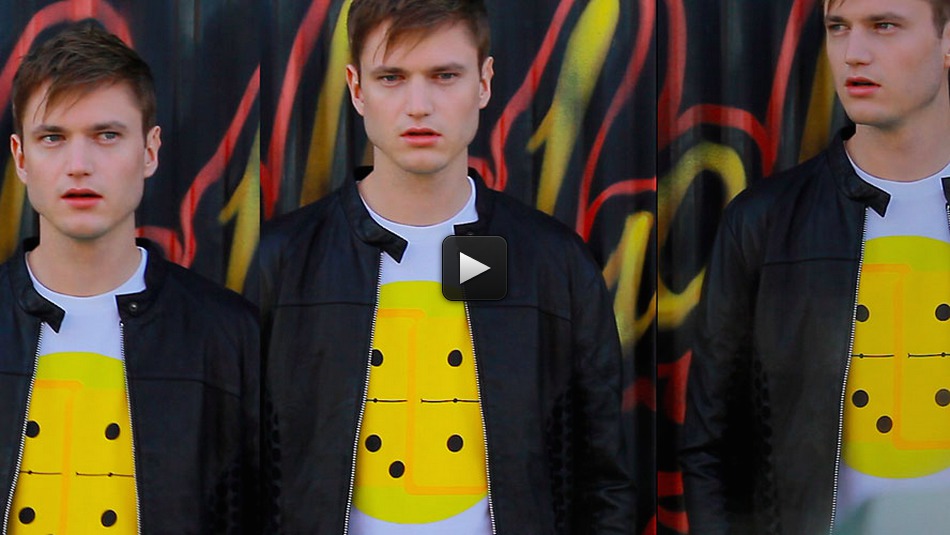