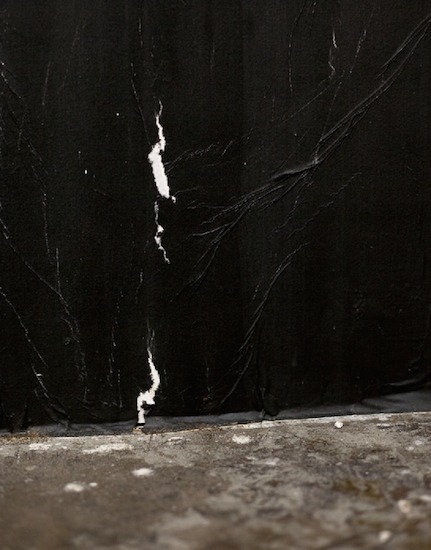 If red is here, can grey be far behind is a two person exhibition by Brooklyn-based artist Graham Collins and Toronto-based artist Jeremy Jansen at the Cooper Cole Gallery in Toronto, Canada. Both artists champion materiality and physicality above all, and eschew the tendency to prescribe meaning through the use of symbols or representation. The materials Jansen and Collins work with belong in the vocabulary of blue-collar discourse; they are unpretentious, kind of crass, and unorthodox when considered in a gallery setting—often, they have their origins in auto shops and metal scrap yards. Though they have backgrounds and formal training in photography and painting, respectively, Jansen and Collins produce objects that extend beyond conventional definitions of these categories into territory that is undeniably sculptural, veering even into installation. Both artists strategically punctuate the gallery space with works that act as partitions; their placement is assertive and powerfully emotive, functioning like profanity in a sentence to enhance emphasis or create rhythm. Together, Jansen’s and Collins’s works comprise a deliberate affront to accepted modes of propriety, serving to invigorate prosaic methods of production.