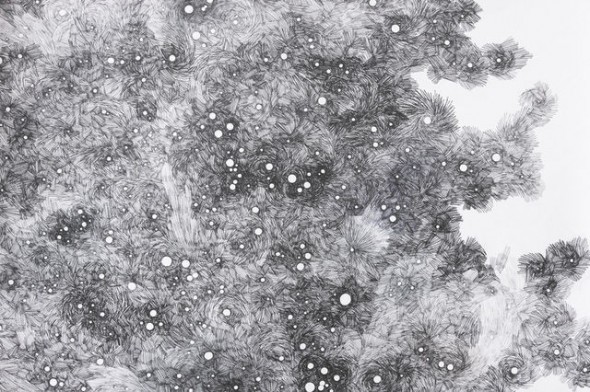 Playing upon the interconnectedness of words and images, Jessica Rankin has created a series of “word constellations.” She begins with a bunch of words, gathered from her own stream of consciousness, from found texts, stores, memories, or fleeting thoughts. Then she cuts the sentences up into single words or phrases, refitting them together, using a method that she calls “guided chance.” These words are then stitched together into complex star-maps on a blue and black ink background.

Her previous work also drew heavily on the use of systems and maps. Some are ‘mental maps’, with codes, signs and symbols exploring themes of memory, intuition, and interpretation. The use of traditionally fine, feminine arts, such as embroidery and needlework, to create such vast universal diagrams is another distinct feature of her work.

For Rankin, poetry has always been special to her. Her mother was poet and playwright Jennifer Rankin and her step-mother is author and poet Lily Brett. For this exhibition, she has collaborated with the poet Brenda Shaughnessey in selecting a group of writers to created poems from the word constellations. Some products of the collaboration are “poems of faded love, the dog of Sputnik, and an ode to Beyonce. Select poetry readings will be held by Salon 94 Freemans on the 5th, 7th, and 16th of November.