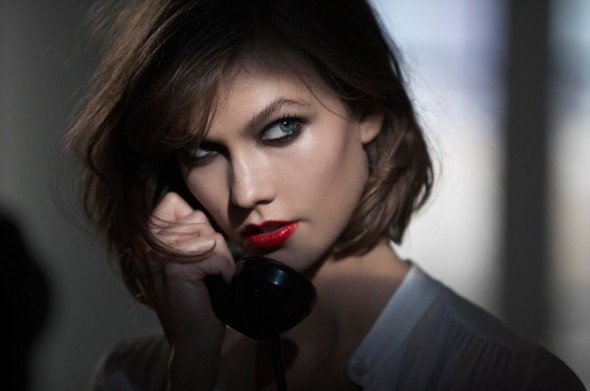 The twenty-one-year old model is starring in Tamara Mellon’s noir-inspired campaign debut film titled ‘High Heels and Sharp Knives’. Tamara Mellon, the co-founder and creative director of Jimmy Choo has Karlie model various shoes from the collection paired with black stockings and blood red nails while portraying a menacing ‘killer’. With the launch of her very first collection in her new eponymous brand, Mellon drew inspiration from Guy Bourdin’s photography.

Karlie even models the ‘Sweet Revenge’ leather legging boots to duplicate the plot of the campaign film. The boots are essentially leather pants with boot soles attached at the bottom and virtually sold out everywhere at the price of $1,995 US.

Karlie winds up in blood, wields a knife, and engages in a steamy rendezvous with a surprising love interest in the film. Written and directed by Danish creative Rie Rasmussen, a thirty-five year old model, actress, and filmmaker who has worked in campaigns for Gucci and runway shows for Victoria’s Secret in the past. With the mini femme fatale plot we already gave away, enjoy the video below for the sexy twist you do not want to miss.

A RARE LOOK INTO THE WORLD OF CHRISTIAN DIOR