This year,  Marilyn Monroe would have celebrated her 89th birthday on June 1st. Even after 53 years of her passing, each day, she grows more and more into a fashion and Hollywood icon. Society deemed her “the dumb blonde” and still note her for her looks rather than her brains. Her “dumb blonde” act was just a character she invented for the public eye. Because of her act, society pinned her as a tragic casualty of Hollywood.  What many people don’t realize about Marilyn was that she was not only a businesswoman, but a brilliant poet and a powerful woman all around. She was performing in a time where women were considered “second-class citizens,” and she fought many obstacles in Hollywood as she worked to overcome the gender discrimination of the era.

Most people have only seen Monroe on the screen, playing the sexy, blonde bombshell, or just have seen pictures of her everywhere and are quick to make assumptions. She was treated so poorly because of her “dumb blonde” persona that she was underpaid for many of her movie roles. However, there is more than meets the eye about her, and what people don’t really know about her, was that she was a true intellect.

Despite the fact that she famously sung, “Diamonds are a Girl’s Best Friend“, she barely owned any diamonds. She collected books, as she was an avid reader. Marilyn only wanted to be photographed reading, and had a collection of over 400 books. One of the last book she read around the time of her death was To Kill a Mockingbird by Harper Lee. She once met author Nikita Krushchev, and had hopes of playing one of the parts in a film adaptation of the book, The Brothers Karamazov. She wrote a collection of poetry, which posthumously was published in a collection called Fragments: Poems, Intimate Notes, Letters, which gives more of a deep insight into her fragile soul. Abraham Lincoln and artist Francisco Goya were two of her idols. She stated in her biography about her fascination with President Lincoln; “I used to read everything I could find about him. He was the only famous American who seemed most like me, at least in his childhood.” She was fascinated by various religions before finally converting to Judaism in 1956. She also practiced yoga before it became a common practice in Western society. 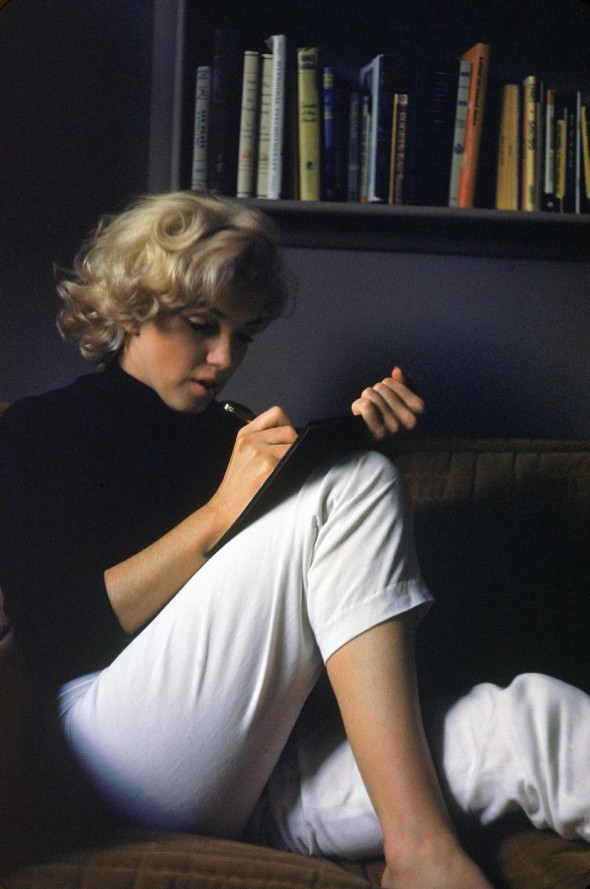 She was the second woman in Hollywood to own her own production company, Marilyn Monroe Productions. “My company was formed because I wanted to make better pictures, improve my work, to secure my income and to help others make good pictures,” she once said. And most importantly, she broke barriers in a time where one’s skin color meant limitations. She was one of Ella Fitzgerald‘s biggest fans, and at the time, Fitzgerald was banned from a Los Angeles nightclub to sing. Monroe promised to sit in the front row for a week if management agreed to let Ella perform. Monroe got her wish fulfilled, and Ella Fitzgerald said, “I owe Marilyn Monroe a real debt … she personally called the owner of the Mocambo, and told him she wanted me booked immediately, and if he would do it, she would take a front table every night. She told him – and it was true, due to Marilyn’s superstar status – that the press would go wild. The owner said yes, and Marilyn was there, front table, every night. The press went overboard. After that, I never had to play a small jazz club again. She was an unusual woman – a little ahead of her times. And she didn’t know it.”

Marilyn’s story ended tragically. Public opinion got the best of her, which probably led to her assumed suicide. Her intellectual accomplishments were not as publicized, and society still hasn’t grasped onto the fact that women are not “sexual objects”. Sexism is still very relevant in Hollywood today, and many talented women have been succumbed to the public belief based on what people see on the exterior, rather than interior.  Women are still more applauded for their looks rather than their brains. We have a long way to go, but hopefully Marilyn’s story will shed light on how women should be treated in years to come.