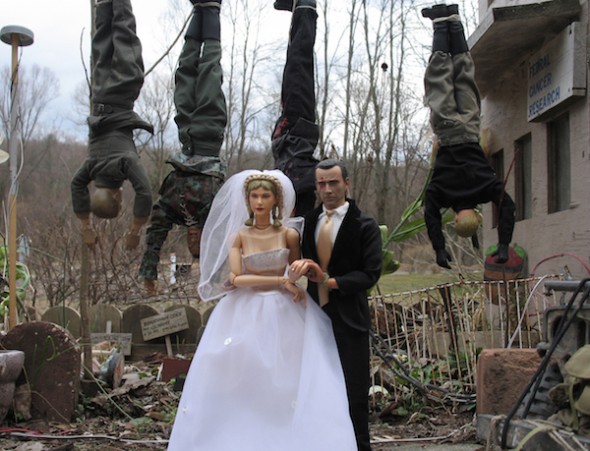 Marwencol didn’t begin as an art piece, or something made to exhibit. It really began with Mark Hogancamp getting beaten almost to death by five men outside a bar. It took Mark more than 40 days in the hospital to heal, and when he was discharged, he had little memory of hsi previous life. So he started to create another life for himself; one of dolls. He built a 1/6-scale World War II-era Belgian town, along with dozens of dolls that represented himself, his friends, and even his attackers. Mark’s doll is captured by the S.S. and is wounded on the side of his face, the same side where he was attacked. This is Marwencol.

But it is more than a collection of toy models. Mark says, “Everybody has a dream. Everybody wishes they had a double that could do the things that they could never do.” From a very personal therapy, Marwencol has gradually entered into the public as art. Between 2006 and 2010, a documentary film was made on the subject, and it has since become a cult classic.

With Marwencol, it is hard to tell what is real and what is made up. Through the layers of Mark’s personal story, the story of the documentary film, the story of the characters of Marwencol, and then the story of it all becoming art, everything seems surreal and strange, stranger than fiction. Mark’s photos have previously been exhibited in galleries in New York. A new exhibition is scheduled to take place at Pioneer Works, New York. This exhibition will feature Mark’s photos of the women of Marwencol.