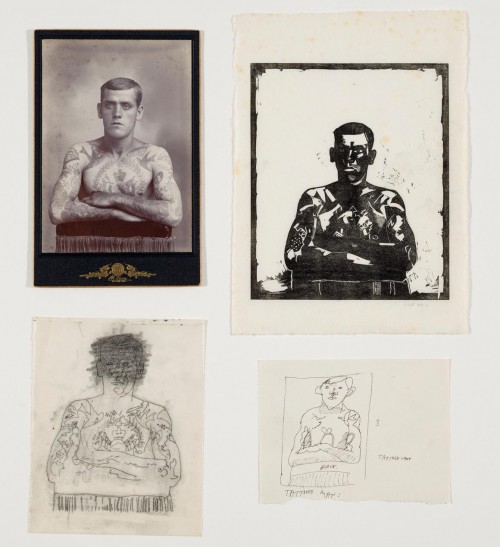 The Paul Stolper Gallery in London has announced a new coming exhibition: Side-Show, an in-depth  exploration of one of Peter Blake’s most iconic portfolios, consisting of five wood-engravings titled ‘Tattooed Man’, ‘Bearded Lady’, ‘Midget’, ‘Fat Boy’ and ‘Giant’ made between 1974 – 1978. The seminal series is displayed for the first time alongside photographs, proofs, studies and drawings from Blake’s personal archive, highlighting the inspiration, process and genesis of the work. The exhibition will also mark the launch of three new etchings, ‘Elvis Two Rivers’, ‘Reverend Ricky Wreck’ and ‘Liberty Beauty Rose’.

In Blake’s hands, postcards, magazines, posters and record sleeves become legitimate source material for making art. He collects them with the same avid passion as a fan or enthusiast. Speaking of his nostalgia for circus imagery and popular entertainment, Blake comments, “There’s a whole background to it, but really it’s a class thing, a working class thing. When I was a kid these were my interests – the fairgrounds, circuses, rock’n’roll. So, at a certain point in making art, when I had to make a decision about what to do, I thought, “be autobiographical ”. Well, it wasn’t that conscious… but  the work became very autobiographical and about popular culture, and that’s what became Pop art. And  it’s still there. I still go to circuses when I can, and concerts.”

The prints in the exhibition display Blake’s extraordinary refinement of the medium of wood engraving; inscribed using a fine-pointed burin into a hard end-grain wood block. Blake studied wood-engraving as a student, but is largely self-taught. The engravings of Eric Ravilious, Edward Bawden, Paul Nash and Claire Leighton amongst others influenced Blake to produce his first two prints, ‘Tiny T.N.T. Tantrum The Pocket Prince’ in 1973 and ‘A Souvenir of the Bath Festival’ in 1974.

Peter Blake was born in 1932 in Dartford, Kent. He studied at Gravesend Technical College and School of Art from 1946 to 1951, and from 1953 at the Royal College of Art, London, where he was awarded a First-Class Diploma in 1956. He then travelled through Europe for a year on a Leverhulme Research Award to study the popular and folk art that had already served him as a source of inspiration. In 1961 he was awarded the John Moores Junior Art Award for his work ‘Self Portrait with Badges’ (1961). Blake became a Royal Academician in 1981, a CBE in 1983 and in 2002 received a knighthood for his services to art. Retrospectives of his work were held at the Tate in 1983 and Tate Liverpool in 2008. He lives and works in London.