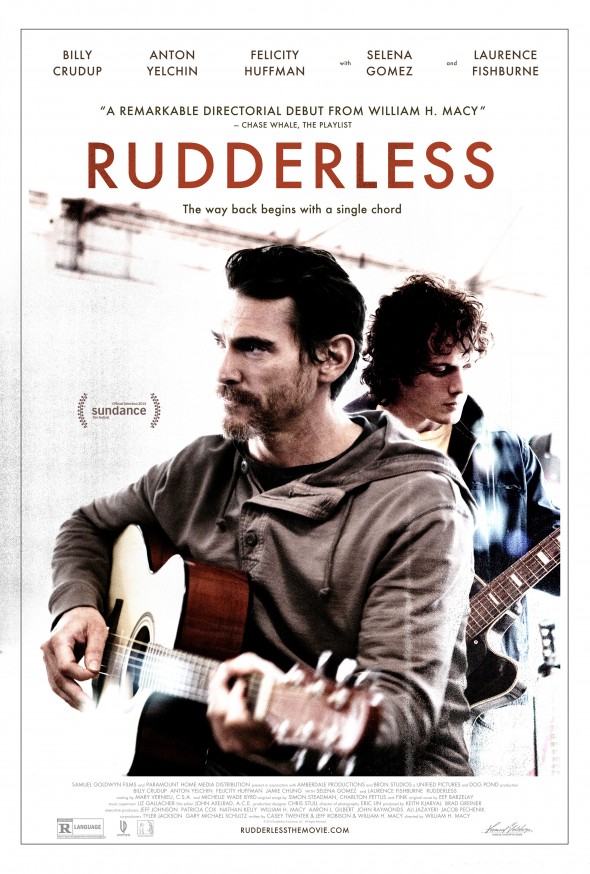 After forty years of acting, William H. Macy – a recognized and admired name from films Fargo, Psycho, Magnolia, Seabiscuit, Wild Hogs, and countless more – has reversed roles from in front of the camera to behind it for his first film debut, Rudderless. (Written by Macy with partners Casey Twenter and Jeff Robinson.) In his own words, Macy states that his first swing at directing proved to be the most invigorating thing he has ever experienced: “I fell in love with the business all over again. And now, all I want to do is direct.” With a collection of fantastic actors, a strong story line with unexpected twists, and a beautiful soundtrack, Rudderless has set the bar for Macy as a director in a very high position. Rudderless had its world-premiere this past January at Sundance Film Festival, where it was presented as the closing film of the night.

The story of Rudderless is centered around the down-spiraling life of Sam (Billy Crudup), a grieving father. After his son, Josh (Miles Heizer) dies to gun violence, Sam’s life as a successful advertising executive is dramatically affected. He leaves the busy routine of the daily life as a businessman to live secludedly on a docked sailboat, arguing with neighbors and drinking away his negative thoughts with whiskey. After Sam discovers a box of demo tapes and book of lyrics that belonged to Josh, the past invades Sam’s life through honest, heart-wrenching songs. Through an attempt of closure with his son, Sam gains the courage to play one of his songs at a local bar, unknowingly attracting the attention of a young music-lover, Quentin (Anton Yelchin). After much perseverance, Quentin convinces Sam to join a rock band with him, which unexpectedly becomes very popular. Through the band, each to them are given a sense of place in the world. 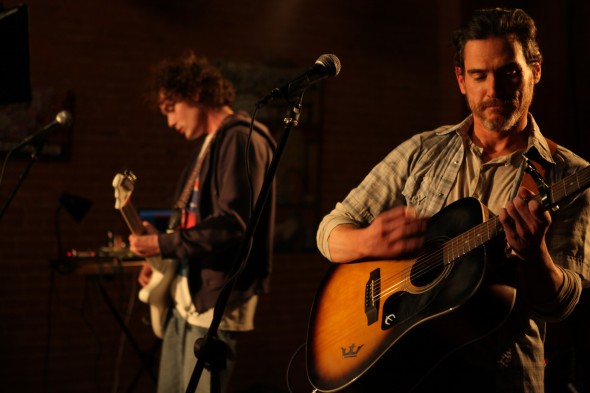 Although the film appears linear at first glance – following and studying Sam throughout his period of grief – it sneakily takes us into the personal lives of other individual characters and their own struggles through small snippets of interactions with Sam in their daily lives. This element is what takes the film even farther, transforming a story we have heard before into a story of multiple lives that we desire to be immersed in. We wish to understand each character and to discover how each one fits in the puzzle of Sam’s struggle with facing death and coping with loss. By establishing a universal connection among the characters and creating a sense of understanding, their interactions and relationships become factors that we can personally relate to. We cannot help but to fall in love with Sam and Quentin, empathize with them on their journey of growth, and rejoice with them in their success.

Aesthetically, the film is enticing for multiple reasons. Director of Photography Eric Lin creates a visual milkiness throughout the film, playing with shallow depth of field. It is filmed intimately, bringing the viewer quietly into each scene. Light plays an important role in the composition, emphasizing the emotion of the characters. Most importantly, the music is what gives the film it’s final boost. In Macy’s words, “One of the major characters in the film is the music.” The melodies will take you on an incredible journey, both by understanding Josh’s struggles and the passionate, eternal love that a father has for his son. Crudup’s vocals – infused with tenderness – will pull at your heart consistently. Once the band is completed as a four-piece, the songs become even more alive, declaring the struggle of youth through the revival of his son.

Rudderless does more than tell a story, it takes us on a journey of solitude, friendship, death, self-discovery, and love. Experience the rush for yourself on October 17, 2014, for its nationwide release.

5 EXHIBITS TO CHECK OUT THIS SEPTEMBER