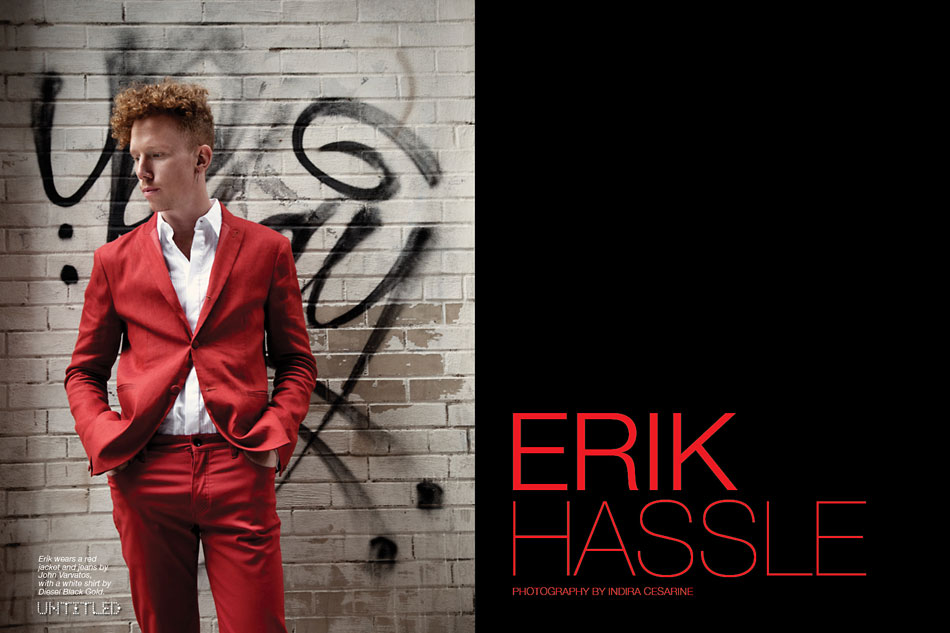 “Music is like therapy for me. When I write songs, it’s a lot of what I haven’t articulated yet – things that are deep within me that I need to get out of myself.” For 26-year-old Swedish singer, Erik Hassle, honesty is the key to his artistry. Influenced primarily by soul music, it makes sense that self reflection is a natural element in his writing process. Growing up two hours outside of Stockholm, where minimal house music is popular, it’s surprising how Hassle found himself tapped into a quintessentially American musical genre. “It’s always been exotic to me, and I always felt like those guys knew how to say it and mean it.”

Hassle stepped into the limelight with the release of his first song “Hurtful” in 2008. It was an overnight success, reaching #11 in Sweden’s charts, while maintaining the #2 spot in Denmark. His first EP, Hassle, remained on Sweden’s charts for ten weeks. After a two-year hiatus during which he lived in between Stockholm and London, Hassle moved to Los Angeles and is back to writing music. He recently co-wrote Shakira and Rihanna’s “Can’t Remember to Forget You“ which debuted on Billboard’s “Hot 100” earlier this year. His EP Somebody’s Party, was released a few months later and features collaborations with the likes of rapper Vic Mensa and singer Tinashe. He just announced his highly anticipated debut full length – due out later this year – in addition to a North American tour with New Zealand brother-sister duo Broods, which will kick off in March and include stops at Irving Plaza in NYC and the 9:30 Club in DC. Hassle recently sat down with The Untitled Magazine for an exclusive interview where he discussed the direction in which he wants to take his career and his love for soul music. 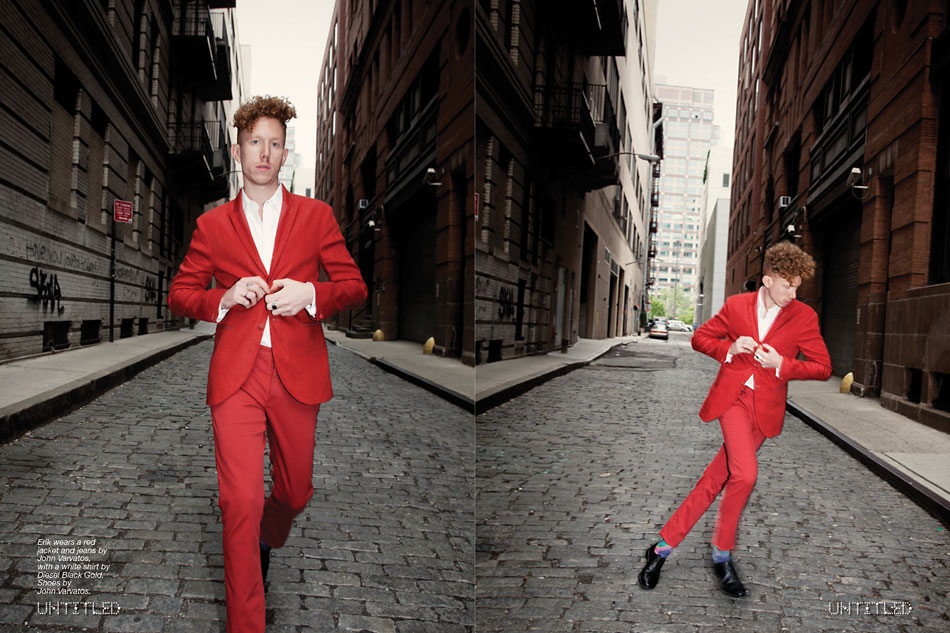 Indira Cesarine: You’re from Sweden and you’ve been performing for quite a few years. Where do you draw the inspiration for your music?

Erik Hassle: My mom was working at the school where I went and had me begin singing in the cabaret in sixth grade. I didn’t expect to, but I loved it. I loved the sudden feeling that I was in control of the teachers who would scream at me. It was a powerful little obsession. From then on, it was all about music. When I was 17 I was spotted by a talent scout, who is now my manager. He came up to me and asked me to come down and produce songs with some great writers that are on my current label, and that’s kind of how the story began.

IC: I heard that you wanted to be a football player?

EH: Yeah, I love football. It’s like a religion to me! I guess things happened more quickly with music. It just took off, and it’s where I felt like I belonged.

IC: Do you remember your first performance?

IC: What about as a professional?

EH: It took me from when I was 17, and started playing songs from my first album, up until now to be close to as good as I was when I was 12 years old, because when you do something for the first time you’re so naked and fragile… So I still remember that as my first performance, when I was a kid.

EH: It’s my take on soul music. I’ve always been very passionate about soul. So I think it’s a mix of the minimal, rhythm-based music that I grew up with – pop and a lot of minimal techno and deep house – and the raspy soul singers that are very much from America.

IC: It’s interesting to be inspired by the sounds of soul music being that you’re from Sweden. I imagine it’s not part of the culture as much as it is in America.

EH: No, it’s not. It’s always been exotic to me. I grew up with Otis Redding and Van Morrison and Sam & Dave, and I felt like these guys knew how to say it and mean it. But I have a broad taste in music. I listen to everything that I think is good.

IC: Who are some of your favorites?

EH: It’s so hard to say just a couple, but when I was a kid I really enjoyed The Prodigy, Fat Boy Slim, Outkast… that kind of music. But, I was also listening to a lot of Michael Jackson and Stevie Wonder and Wilson Pickett– a lot of soulful music. David Bowie is one of my favorites too. I think what really defines the music that I’m drawn to is that it reflects the time during which it was made. 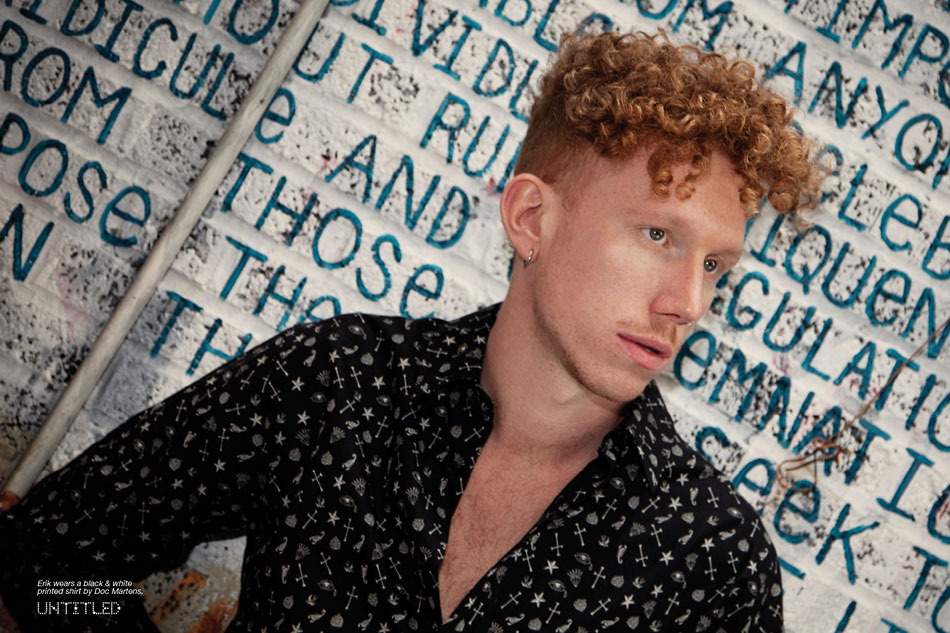 IC: Tell me about your song writing process?

EH: Most of the music that I make reflects how I want to tell a story. Music is like therapy for me – when I write songs, it’s a lot of what I haven’t articulated yet, things that are deep within me that I need to get out of myself. So I’m very honest. Even if it’s a story about me being hurt by someone, it comes out of me and I try to tell it in the most cinematic and beautiful way that I can. I’m just trying to be a good messenger! If you’re honest with yourself, then you become relatable to other people. You don’t need to complicate things – just let it come from your heart. It may come off a bit simple, but you can catch glimpses of wisdom if you’re honest with yourself.

EH: I haven’t really gotten there yet. I wrote a song a long time ago with three other people that I didn’t sing on, but I still went in with the mentality of wanting to write something that I can relate to and stand for. That song began circulating, and was eventually picked up by Shakira.

IC: So, for the most part all of the songs that you’ve written for other artists were intended for yourself and then got picked up by someone else?

IC: Where do you draw the inspiration from for your songwriting?

EH: Very personal places. I also like to reinvent and develop – I’ve written a lot of songs using other people’s beats. I’m constantly trying to bring something new to what I’m doing. 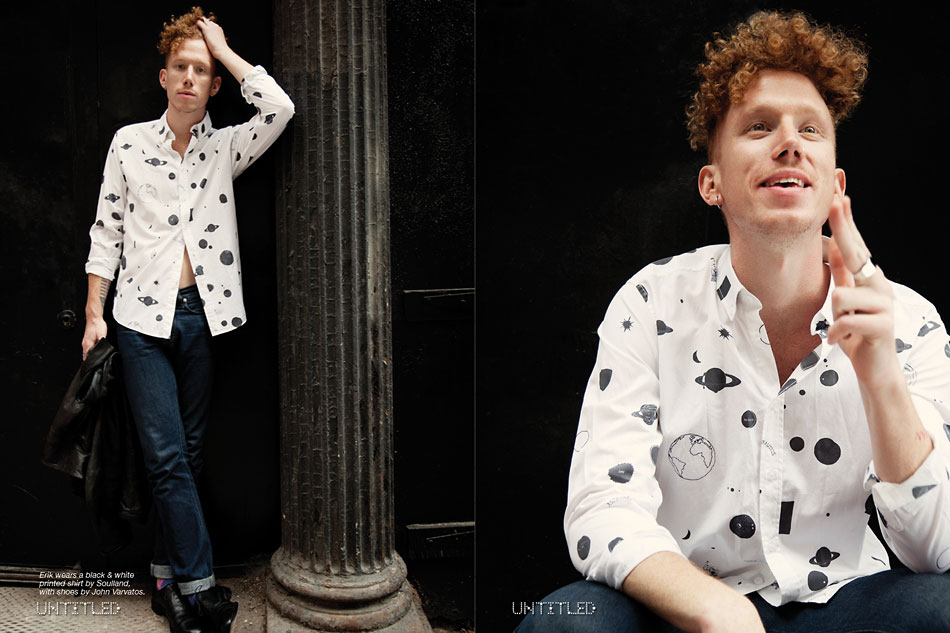 IC: Is there any particular song that resonates with you as your signature?

EH: I think so far out of what I’ve done, the new material that I’ve released and the album that I have coming out this year shows a peace that I’m at with my own artistry. And it feels great. Though the EP that is out right now is a good example of my signature style.

IC: Can you tell me a little bit about the forthcoming EP?

EH: It’s called Somebody’s Party and I’ve released a few singles from it – one called “Talk About It” and one called “Pathetic” – it’s a taste of what the album will be like.

IC: When do you see the album coming out?

IC: Do you have a title for it yet?

EH: No. It’s because there may be some songs that switch out so I wouldn’t dare announce a title. 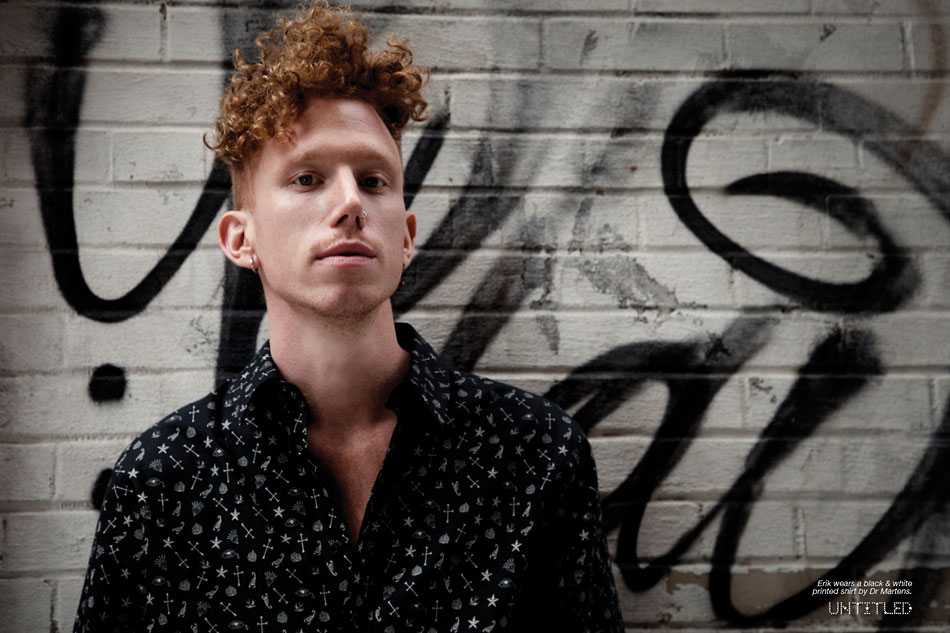 IC: Can you tell me a bit about your single “Talk About It“?

EH: I wrote that song in Stockholm about two years ago with a friend named Oscar. I was a bit tired of hearing about a bad relationship a friend of mine was having, and the song is based on that. Musically it was one of the first songs that got me to where I am right now.

IC: Tell me a little bit about this past tour that you were on?

EH: I was touring with a really great rapper, Vic Mensa. Prior to that I was on tour supporting a Danish artist named MØ. We toured all over and did about 12 shows. Vancouver and Toronto were amazing, same with Portland.

IC: You were telling me that you live in LA. How does it feel to come from Sweden and now live in the states?

EH: It’s inspiring. Being in LA for me has provided a little bit of a spark for my music. There is something about being far away from home – it’s like when you’re a kid and you act differently when your parents aren’t around – I think being in LA is like that. It’s like no one is watching you, and it’s good for your creativity. I feel like I can use my imagination a lot more in LA. Even though I’ve lived there for a year I still look at myself as a guest, you know?

IC: You’ve also done a lot of collaborations as well – can you talk about some of the standouts?

EH: I have two collaborations on the EP – one with Tinashe and one with Vic Mensa. I’ve done a lot of collaborations back in Sweden but here I’m sort of building up – I’m still an outcast! I’ve met a lot of great people but they’re not interested in collaborating yet.

IC: What are some exciting things that we should be looking out for this year?

EH: What I’m hoping to do is come on another tour out here in the US. Maybe a mini California tour around the state and then I’m coming out with a new single – it’ll be off of the forthcoming album. When I release that single I’m hoping to get a big US tour.

Don’t miss our behind the scenes video with Erik Hassle below:

0
Indira Cesarine February 6, 2015
No Comments Yet