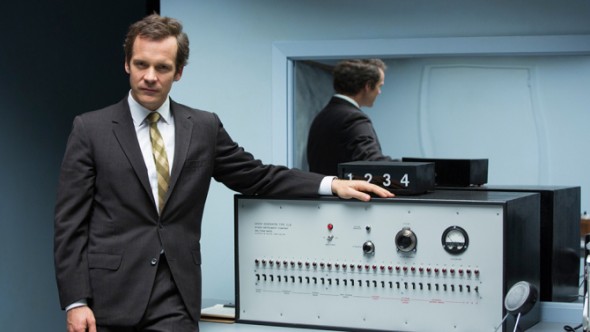 Michael Almereyda’s seventh film at Sundance, Experimenter, is a film that asks more questions than answers them. As Almereyda (2001’s Hamlet, Trance) stated before the film began, Stanley Milgram, the film’s biopic subject, was “better at asking questions than answering them.” The film does exactly the same by asking questions, but on the surface. In the vein of films you may have seen before, like, most recently, The Imitation Game, Experimenter seems to give us the factual standpoints: i.e.- the things we can easily just learn by picking up textbook or reading up on Wikipedia.

Sarsgaard (Kinsey, Jarhead) plays the social psychologist whose experiments testified the human response to “blind obedience” vs. “malevolent authority,” and whose life legacy created a new field of studies for social psychology and sociology. Later in his life and career, his worldwide recognition became even more paramount when his staple Obedience to Authority was published. His devout wife, Alexandra “Sasha” Milgram (a very animated Winona Ryder) is touched upon heavily in the film. Though, as most know, or I hope know, Milgram’s peer shock experiment was the most notorious of all his experiments, resulting in academia recognition, moving due to work (Harvard), and controversy, of course. Experimenter opens with the methods, the ideas, the factors, the participants, and such pertaining to the “Milgram experiment,” but it does so in such an extensively droll pace that you begin to wonder why make the first half hour focus on the most obvious experiment of them all. Alemereyda seems to find the experiment as a strong basis for the film’s message, but it comes across as underwhelming and less stimulating than one would hope for. It seems that though the film touches upon Milgram’s own influences, including Eichmann’s trial, his immigrant parents, and the Holocaust. The complexities of Milgram’s character onscreen warily make way for the marriage aspect of the film seem believable. In all honesty, the juggling circus act of bold ideas, ideas that stimulated the best of minds, often muddles the film’s potential because so many things are trying to be communicated on the nose. There’s a scene where an elephant walks behind our lead as he speaks to the audiences. Its poetic audacity is just too overbearing.

Almereyda, who also wrote the film, means well with the film’s message regarding our places in the world, how we participate and interact with each other, the schisms behind social nuances, the “struggle of empathy,” as Sarsgaard made clear in the Q&A, accepting the past and living for the future, but the central focus of the film becomes hindered by stylistic ploys to convey Milgram’s person, begging us for empathy, understanding, and immediate relation. Milgram speaks to us audiences, looking directly into the camera, as if he’s constantly demanding our attention and reassuring us as viewers that we’re watching a movie, which seems a bit distant from the extremely personal aspects of Milgram’s life that could’ve been explored even further. The disconnect always struck heavily during these cinematic devices.

During the film’s Q&A, an audience member inquired about the backdrops that Almereyda seemed so instinctively inclined to incorporate for the film during scenes where Milgram. The film depicts Stanley Milgram, played by the remarkably talented Peter Sasha enter cars, echoing old Hollywood films. The answer was, duh, these were “archival photographs and footage.” Audiences laughed. What I find most laughable about Experimenter is the way it feels: an archive, something easily found, accessible, and appropriated in such a way that its shtick runs dry and leaves one feeling as if they witnessed a theatrical attempt in dramatizing an important man’s life. While Sarsgaard works well with the material and given direction, as well as Ryder, it doesn’t suffice. Even other stars that joined the bandwagon, including John Leguizamo, Taryn Manning, a randomly awkward Anton Yelchin, and a charming Dennis Haysbert, couldn’t help the film’s sterile approach to something that could’ve resonated with today’s world, like Kinsey, which Sarsgaard also starred in. Maybe Experimenter will appeal to those who have never heard of the Milgram experiment, have a knack for stylistic distractions, and indulge in such star driven casts. It was indeed an experiment: an experiment that’s been done before.

Review by Taylor Ghrist for The Untitled Magazine